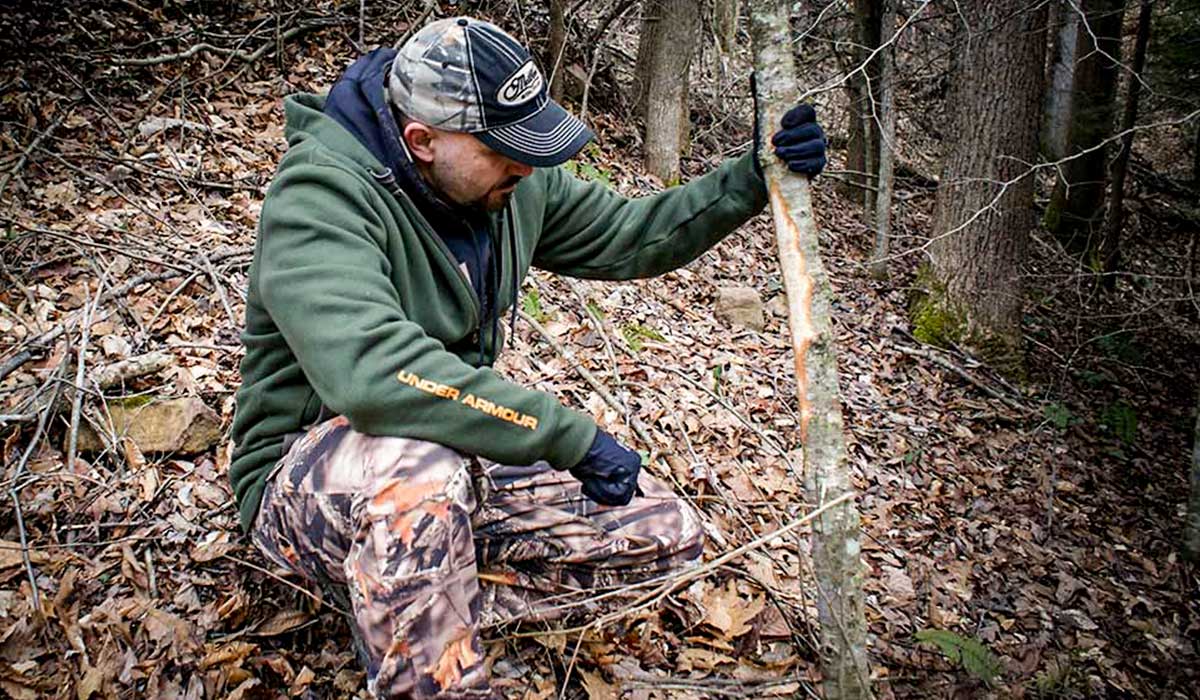 It’s a tough pill to swallow, but every year thousands of bowhunters are faced with the daunting task of relocating those once unguarded bucks that filled up SD cards and imaginations during the lazy days of summer.

It is almost a guarantee that once velvet has shed that buck, you thought you had patterned suddenly vanishes into thin air. This is even truer as the calendar folds into the dreaded October lull. But where do these once highly visible bucks go? That’s the million-dollar question that so many of us try to answer each year, myself included.

Honestly, there are a few theories on the subject, but I don’t think many hunters know why. No matter the reason, the focus of this article is methods you can use in conjunction with your trail camera to relocate these bucks. Here are some thoughts to consider.

It may be a little early for scrapes but buck rubs should be showing up in your area very soon if they haven’t already; especially in staging areas near food sources. However, the only problem with that is the actual rubbing is often times done under the cover of darkness in areas that are suitable to hunt. That doesn’t do much to help you feel a tag.

However, looking closely at the direction the rub is facing can help point you in the right course to find a potential bedding area. In other words, think about the way the buck was standing when he made the rub and then start looking behind him for the trail he walked in on. That investigation could lead to a few clues that could eventually lead to the whereabouts of a possible bedding area.

In addition, consider moving deeper into cover in order to find more rubs along the buck’s path as he heads to a chosen food source. It will probably differ from the trail he used during the summer months simply because the cover has changed due to falling leaves as autumn approaches.

Hunters should also remember that increases in testosterone and the changes in cover both impact bucks, especially mature ones, in a very profound way. The larger bucks we all seek suddenly become more secretive and somewhat standoffish. In order to find them you have to think in those terms. Their carefree days of summer are long gone. Your strategies should reflect that.

As the days pass by a buck’s desire to bread increases. So does his need to leave behind his calling card. Savvy hunters should consider making their own buck rubs and scrapes in an effort to draw out that big buck in the daylight or at the very least get visual confirmation that he is in the area.

When it comes to scents, I’ve used Smokey’s Deer Lures with great success and they even offer scents made specifically for creating your own buck rubs, scrapes and licking branches.

If you suspect a buck is using a certain area then nothing could be better than to attract him to your trail camera by using deer lures and attractants. This is especially true if you have backtracked far enough into cover that food no longer becomes the main temptation. Using this tactic really helps narrow down possible travel routes because you are offering a reason for that buck to choose the one that your trail camera is monitoring.

While trail camera images are an awesome tool, hunters should not neglect the advantages of capturing “video” in addition to images. I like to run at least two cameras on a specific spot with one capturing still images and the other recording video.

The video camera allows me to see how each deer that passes by behaves. It is amazing how different mature bucks behave compared to younger aged bucks. Every move seems to have a purpose and a thought. They move slowly and methodically with the highest level of awareness. Video will help you see just how cautious your target buck really is.

Capturing trail cam video also allows you to watch a buck approach the area. By mounting your camera to face up the trail you are watching (instead of simply across it) you can actually see the buck as he approaches. This can provide a wealth of knowledge that still images simply can’t.

However, don’t neglect the value of capturing photos. When used in conjunction with DeerLab’s Trail Camera Photo Management Software users can quickly discover exactly how bucks are traveling based on variables such as time of day, wind direction, wind speed, date and weather conditions. All from still photos and from multiple cameras.

Cameras can also be elevated so that they point more downwardly at trails or food plots. This can be effective when dealing with cagey, older-class bucks who suddenly notice every detail in the environment once they shed their velvet and break away from summer bachelor groups.

Either way, utilize the advantages that come with having multiple trail cameras in the area you are watching.

In order to locate post summer bucks you are going to have to think like one, move like one and place your trail cameras in areas that you wouldn’t have considered just a few weeks or a month prior.

Still, the knowledgeable hunter should be aware that changes are on the way as pre-rut and rut activities increase. This means moving trail cameras once again. But for now, locate food and secure travel routes to and from bedding areas and don’t expect a great deal of daytime activity. It simply isn’t going to happen unless you move closer to where that cagey buck is bedding.

Just make sure you move in small increments to reduce the chances of bumping the very buck you are hunting. Best of luck.